Disaster Service Corporation Society of St. Vincent de Paul USA (DSC SVDP-USA), is responding to the recent tornado outbreak and storm damage throughout the South Central and South Eastern United States. DSC SVDP-USA’s Regional Disaster Representatives and staff are working with Council Presidents to determine what level of support is needed to meet the needs of Vincentian communities across the region. DSC SVDP-USA is prepositioning staff and readying financial and in-kind resources to deploy to these disaster zones.

The path of destruction cut across Texas, where 25 tornadoes touched down Monday killing at least one person in Grayson County, TX, and at least two tornadoes that damaged about 1,000 homes in Williamson County, near Austin. Governor Abbott has declared 16 counties for emergency assistance. On Tuesday, a deadly tornado tore through the New Orleans area, killing at least one person. Widespread destruction was reported in the area. In South Louisiana the communities of Arabi, St. Bernard, and the Lower Ninth Ward were severely impacted.

The storm system that spawned deadly tornadoes across Texas and Louisiana this week will continue to push east Wednesday, leaving a large portion of the country under the threat of more severe weather.

More than 65 million people from central Florida to southern Michigan and east to the Virginia coast are under a slight risk for severe weather Wednesday, including the possibility of large hail, gusty winds and tornadoes. Cities in the threat area include Columbus, Ohio; Fort Wayne, Indiana; Savannah, Georgia; and Charlotte, Raleigh and Greensboro in North Carolina.

DSC will be posting the needs of this community and ways you can help on our website and social media this upcoming week.  Also, please follow us on Facebook for our “Lenten reflection “through the Eyes of those suffering from disasters” @DisasterServicesCorp  and check our twitter feed @svdpusadisaster. 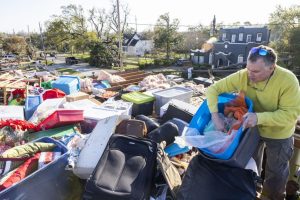