The National Council of the United States Society of St. Vincent de Paul is excited to welcome the new National Director of Poverty Programs, Steve Uram.

Steve will be work as the Society’s representative among Catholic groups including the U.S. Conference of Catholic Bishops, and other national nonprofit groups regarding public policy. He will serve as the national staff support person for national committees including Systemic Change, Voice of the Poor, Housing, Immersion / Reentry, Back2Work / Workforce Development, Bridges Out of Poverty, and others.

“As a life-long Catholic, I am truly excited to join the National Council where I can live my faith and make a difference each and every day,” said Steve.

Steve is part of a big, Catholic family and is a die-hard St. Louis Cardinals fan! 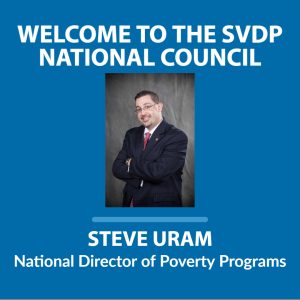