Months after rescue of 87- year-old and her dog from squalid Dallas home, Poldi starts anew

Months after rescue of 87- year-old and her dog from squalid Dallas home, Poldi starts anew

“That something like this could be going on right beneath our noses and no one knew was awful.” 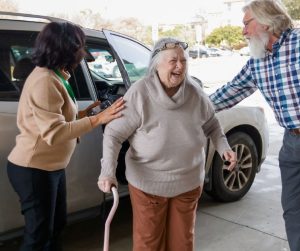 Poldi Tonin (center) is helped out of the car at Tonin’s new complex Juliette Fowler Communities in Dallas on Thursday, 2022, by Maria Stanley (left) and Chuck Stegman, who are both with the Society of St. Vincent de Paul charity at St. Thomas Catholic Church and joined together to help Tonin. (Liesbeth Powers / Staff Photographer)

Six months after 87-year-old Poldi Tonin was rescued from the filth and rot of her rat-infested East Dallas house — long cut off from the outside world — she begins
2023 in a safe new home and with cautious hope for a new life.

Poldi’s story, which I first told in August, is that of a woman well-read and street smart who returned to Dallas after years working in New York City. She bought a white-frame cottage on the edge of Lakewood in 1987 and rode the bus daily to her job downtown.

But the residue of soul-crushing trauma from her early years — episodes that even now she insists on keeping locked away — got the better of Poldi. Depression and
anxiety inflated a distorted sense of mistrust, anger and, finally, the decision to exist with her beloved terrier Lexi in total isolation.

Having turned away many who tried to help, Poldi seemed destined to die in her toxic home with Lexi by her side.

Then volunteers from the Society of St. Vincent de Paul charity at St. Thomas Aquinas Catholic Church showed up with their gift of enduring patience. They refused to let Poldi’s obstinate armor, worn to hide her fragility, drive them off.

“This is what we are supposed to do,” said Maria Stanley, who has led Poldi’s St. Vincent team. “Just think, if everyone would just help one person.” 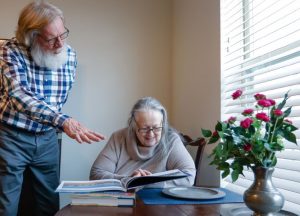 I was on hand Thursday when Maria and fellow Vincentian Chuck Stegman introduced Poldi to her permanent home in The Peak, the sparkling new apartment development inside Juliette Fowler Communities in Old East Dallas. Poldi, a delightful and seemingly decade-younger version of the woman I met in August, proclaimed it “a day of surprises” as she discovered one treasure after another that volunteers had pulled from the disintegrating interior of her sincerazed home.

Century-old family photos. The two Jewish mezuzahs long affixed to her old home’s front and back doors. An elegant mirror, porcelain objects and Waterford crystal. Her two treasured Neiman Marcus scarves, which she had framed decades ago.

Decorated in Poldi’s favorite colors of blue and white, the cheery apartment shows the subtle touches of the interior-decorating magician Maria brought in to help make it perfect.

When Poldi asked why one of the drawers was missing from her refurbished antique buffet, Maria gently reminded her it was lost to the rodents that invaded her previous home in those last years. Poldi doesn’t remember much about how badly life had deteriorated before her rescue. But her days have been vastly different since the Vincentians moved her first into a North Dallas extended-stay hotel and now into the spacious apartment.

She has had real food, working utilities, a clean bed and a shower. She’s had regular medical attention, resumed her passion of newspaper reading to catch up on the
many world events she missed — and even gotten over her terror of riding in a car.

“She had no way to know what day, month or even year it was,” Maria told me. “She still has no idea what COVID is. How would she?” 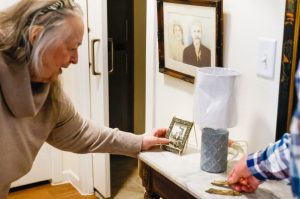 Poldi Tonin looks at a family photo and the two mezuzahs saved by Chuck Stegman from her old home. (Liesbeth Powers / Staff Photographer)

Poldi is in amazingly good physical health. She’s a tough woman and a courageous one, traits that undoubtedly helped her survive the hell in which she was living.

But even the strongest of us need support — and my words are inadequate to describe the miracle that Maria and her team have worked to create what Poldi calls
her “going-forward life.”

The new Poldi is invested in what’s to come: replacing favorite books that couldn’t be saved, getting back to her genealogy work and needlepoint, and helping the
Juliette Fowler staff with an upcoming history project.

“You can start over at 87, and we’re supporting you as you do just that,” Maria repeatedly tells Poldi.

The future darkens only when Poldi remembers Lexi, the sweet 12-pound terrier who habitually curled up next to her in the old house and barked to keep the rats off the bed so she could sleep.

After living with great fosters since the pair’s rescue, Lexi,with Poldi’s bittersweet OK, has been adopted by a Dallas family whom Maria describes as “treating their
dogs like gold.” 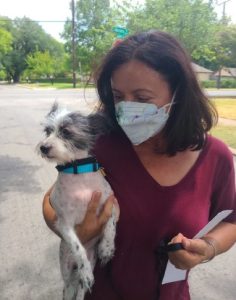 Maria Stanley with Poldi’s dog, Lexi, after the pet received a “medical shave,” shots and thorough exam at the vet July 26. Lexi has since been adopted by a Dallas family. (James Stanley / Family photo)

Poldi walks well with a cane, but her mobility and short-term memory issues prohibit her from adequately caring for Lexi, who has her own housebound trauma from which to heal.

When Chuck thinks back to the initial July visit he and Maria made to the Abrams Road house, his first thought is of the dead rat rotting in the middle of the room
where Poldi invited them to sit.

“To see Poldi now, it’s nothing short of miraculous,” said Chuck, who regularly spends hours in conversation with her as they discuss current events and family history.

“Maria just has a way of connecting with people and is convincing,” he said.

Maria told me Poldi’s rescue wouldn’t have happened without Chuck. “I would not have walked in that door, and gone back in again and again without him.”

A cavalry of generous people, many of them from St. Thomas Aquinas, have helped clear the way for Poldi’s new life.

At the Sonesta Extended-Stay Suites, Poldi’s home for almost six months, staff treated her with special care. Now the sale of her property has provided the funds to
live a comfortable life at Juliette Fowler.

Realtor and parishioner Becky Oliver handled the sale without charging any fees. Craig Penfold at Chicago Title did his work pro bono, as well.

Becky was horrified when she read in August about Poldi existing in such dreadful conditions in a home that she, like so many of us, drove by hundreds of times a
year.

“In this community, where there’s so much affluence — that something like this could be going on right beneath our noses and no one knew — was awful,” Becky
said.

Another of Poldi’s heroes is Dr. Akira Numajiri, who despite having no openings for new patients, agreed to take her on after learning of her story.

Poldi is “blatantly honest with him, says whatever is on her mind and he is this lovely man who ‘gets her,’” Maria said.

With volunteers determined to save any belongings they could from Poldi’s house, in stepped brand-new Vincentian Andy England, who had a connection with Mike
Paschall, the owner of a local restoration company.

Paschall and his crew removed, cleaned and stored what was salvaged — and didn’t charge a penny. Andy spent his Christmas refurbishing Poldi’s furniture so it would be ready for moving day. 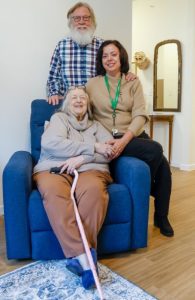 Poldi Tonin with Chuck Stegman and Maria Stanley, right, at her new home, which she and her volunteer supporters say starts the next chapter of her life (Liesbeth Powers / Staff Photographer)

No one has done more than Maria, as much as she tries to deflect the praise.

“Maria has gone above and beyond anyone or anything I can expect in my life,” Poldi told me. “She’s a saint.”

Maria does not see it that way. She feels strongly that each of us is on this planet to help others — not to hope someone else will pick up that responsibility.

Her husband, James, and her son and daughter, both in high school, knew not to get in her way. Maria, a clinical gerontologist and social worker, is a veteran of tough cases, but even she acknowledges it’s been a grueling six months.

The payoff is knowing she has put Poldi — who will have continued support from Maria, Chuck and all the St. Vincent team — on a hopeful path. The once crusty
octogenarian now giggles that she wants to live to be 100.

May we all be Vincentians in our actions this coming year.

Contemplation — At the Top of the Stairs