Next Nominee for Youth Award Announced

Next Nominee for Youth Award Announced

This year, the National Youth Committee hosted a Society-wide search for young people doing amazing work in their community. Vincentians from around the country nominated youth from their Councils for the new Alice Garvey Excellence in Youth Award which will be presented at the National Assembly in Baltimore.

“As a committee, we were blown away by the number of submissions and the incredible projects these youth were doing on behalf of the Society of St. Vincent de Paul,” said John Paul Brissette, National Youth Committee Member. “Each week leading up to the National Assembly, we will be shining the spotlight on the nominees and their stories. Our goal is to encourage and celebrate our youth involvement in SVdP with excerpts directly written by those who nominated them.

This week, we would like to introduce our next nominee:

Amy started volunteering near the end of elementary school because her parents were already Vincentians. She began delivering food to homeless shelters. When Amy entered high school she became more engaged with the Society of St. Vincent de Paul. She began to encourage her friends to join and volunteer with her, she succeeded. Amy and her friends began collecting and delivering socks, shirts, pants, and daily necessities as well as serving the homeless at meal sites. In 2019, Amy attended a Vincentian retreat to grow in spirituality with her fellow Vincentians. Her service earned her the 2019 President’s Service Award. In 2021 she attended another Vincentian retreat as well as the San Pedro district annual meeting. I know she will be a member that will continue to volunteer in the future to the best of her ability that is why I nominate Amy Lee for the Alex Garvey Excellence in Youth Award. 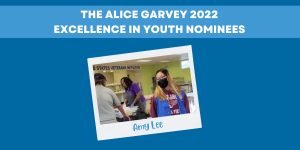