Disaster Services Corporation is responding to the recent flooding and storm damage throughout Middle Tennessee. At least 22 people were killed, including many children. Up to 17 inches of rain fell in Humphreys County in less than 24 hours, shattering the Tennessee record for one-day rainfall. In a community used to tornadoes and seeking shelter in their basements, this flooding left them completely unprepared. They were forced to seek refuge in attics, on rooftops, and in their cars.

The flooding in rural areas took out roads, bridges, and telephone phone lines. “Many of the missing and dead lived in the neighborhoods where the water rose the fastest,” said Humphreys County Sheriff Chris Davis, who confirmed the 22 fatalities in his county. The dead included twin babies who were swept from their father’s arms, according to surviving family members, and a foreman at county music star Loretta Lynn’s ranch.

Due to the dedication of St. Vincent de Pauls’ Conference at St. Patricks’ Church, lead by Barbara Hooper, Disaster Service Corp. and the amazing Vincentians with the “St. Louis Sluggers,” they have been able to rehab many homes.

According to local estimates there are another 200 homes on the waiting list for assistance. DSC will be posting the needs of this community and ways you can help on our website and social media this coming week. 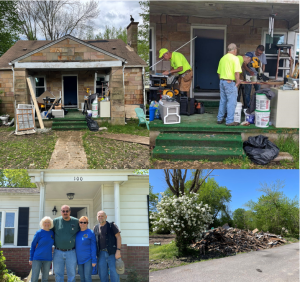 Stores Corner: Staying in Contact With Your Customers is Critical

Contemplation: The Best Way to Give Help