“I like to tell folks that I have a little black nun inside of me,” Brother Mickey McGrath said in the introduction to his book This Little Light: Lessons in Living from Sister Thea Bowman. Brother Mickey, an artist, and a 50+ year old Irish American member of the Oblates of St. Francis DeSales, did not get to meet Sister Thea before she died. That didn’t stop her from transforming his life. He experienced Sister Thea through research and conversations with people that knew her. Before ending that same introduction, Brother Mickey stated “I think that God, weary and hoarse from trying, just gave up and sent the unforgettable, indefatigable Sr. Thea Bowman to teach me a thing or two.”

An interview with Sister Gail Trippett revealed that Sister Thea had been her professor while completing her master’s in theology from the Institute for Black Catholic Studies at Xavier University in New Orleans. Not only was Sister Gail one of her students but she was also one of two nuns invited to share Sister Thea’s Mississippi home once school was completed. One of the most meaningful remembrances from that time spent with Sister Thea was expressed by Sister Gail’s pronouncement “she wanted everyone to find the God inside themselves…She pushed the limits to help people find all they were capable of (doing).”

Sister Gail repeated to me Sister Thea’s testimony about a hometown experience that may have spearheaded her advocacy for people. In Sister Thea’s hometown of Canton, Mississippi there was an elderly black neighbor that walked to mass every single morning. This gentleman had to walk past a white Catholic church to get to the black Catholic church. One morning he wasn’t feeling well and didn’t feel he could make it to the black church. So, he stepped inside the white church to sit down in the back to pray until he could make it back home. The parishioners immediately called the police.  The elderly black man was arrested.

Sister Thea was so upset that she contacted the Bishop to get this man freed from jail. Sister Gail believes this was one of the moments that helped Sister Thea realize that we all have the opportunity to use our voice for others. There were a series of things like that. “Sister Thea knew if God gave her the ability to have a voice that others listened to in such a way that they would change – that’s what she was going to do. What she lived for was to be a servant to God’s plan for her life.” As a child she couldn’t have known that even after death people would listen to her words with both ears — whether they were children, elders, men, women, nuns, priests, bishops, Catholic, or non-Catholic.

Sister Thea Bowman’s address to the United States Conference of Catholic Bishops (USCCB) included a quote from Malcolm X in which he stated “My folks, most of ‘em didn’t come over here on the Mayflower, they came over here on slave ships in chains.” Sister Thea pointed out that these folks were “proud, strong men and women – artists, teachers, healers, warriors, and dream-makers, inventors and builders, administrators, like yourselves; politicians, priests – they came to these shores in the slave trade. Those who survived the indignity of the Middle Passage came to the American continent bringing treasures of African heritage, African spiritual and cultural gifts – wisdom, faith and faithfulness, art and drama…” She told every person attending the USCCB Conference, “It means that I come to my church fully functioning. I bring myself, my black self, all that I am, all that I have, all that I hope to become. I bring my whole history, my traditions, my experience, my culture, my African American song, and dance and gesture and movement and teaching and preaching and healing and responsibility as gifts to the church.”

Sister Thea Bowman truly described herself when she told Mike Wallace during her 1987 60 Minutes interview, “I think the difference between me, and some people, is that I’m content to do my little bit. Sometimes people think they have to do big things in order to make change. But, if each one would light a candle, we’d have a tremendous light.”

She died from cancer at the age of 52. New York’s Cardinal John O’Connor, whose motto was, ‘There can be no love without justice’, was among the many who saluted her in print. In his diocesan newspaper column, he wrote, “Friedrich Nietzsche said: ‘The world no longer believes because believers no longer sing.’ He didn’t know Sister Thea Bowman, dark nightingale. I am grateful that I did.” He called her a “quintessential woman,” a “quintessential religious,” a “quintessential black…never a whit self-conscious… When Sister Thea talked ‘soul,’ I knew that most of what I had listened to before had been stereotype. For her, ‘soul’ was all the misery of the crucifixion and all the glory of the resurrection.” He said he suspected that no one had a “deeper understanding of the Mystical Body of Christ…Sister Thea was quintessentially a Church-woman.” That’s why, he said, the “Bishops of the United States listened to her so raptly…There was a quiet in her suffering, a dignity, a nobility that never made light of pain, but never treated it as an impossible burden. “That he compared to the crucifixion, which, he said, she accepted,” as a gift beyond measure.

Sister Thea’s father’s father was a slave who achieved a 2nd grade education. Her mother’s mother was a teacher for which the Greenville, Mississippi school she founded carries her name. Theron, her father, was a physician. Her mom, Esther, was a teacher. Sister Thea’s parents named her Bertha. Born in Yazoo, she grew up in Canton, Mississippi. She was brought up in the Methodist church but converted to Catholicism as a pre-teen, as a result of ‘evangelization through education.’ She knew quite early that she wanted to follow in the footsteps of the educators (Franciscan Sisters of Perpetual Adoration) at Holy Child Jesus School. So, at the age of fifteen, Bertha headed to St. Rose Convent, the La Crosse, Wisconsin motherhouse of the Franciscan sisters. To honor her father, Bertha took the religious name “Thea”, which means “of God”.

Sister Thea Bowman was an Educator, Evangelist, Singer, Writer, Missionary Disciple, Advocate for Cultural Awareness and Racial Harmony, and Civil Rights Advocate. She received a B.A. in English, Speech, and Drama (1965) from Viterbo College in La Crosse, Wisconsin. Sister Thea received her M.A. in English (1969) and her PH.D. in English Language, Literature, and Linguistics  (1972) from Catholic University of America. She was a co-founder of the Institute for Black Catholic Studies at Xavier University, and the first African American woman to be awarded an honorary Doctorate in Religion by Boston College in Massachusetts (1989). Sister Thea Bowman was a Franciscan Sister of Perpetual Adoration (FSPA) and when she was endorsed for sainthood, Sister Thea was still recognized as the first and only African American member of her order. Sister Thea wrote one of the three Prefaces to the African American Catholic Hymnal Lead Me, Guide Me (copyright 1987). Just to reiterate her reference to Malcolm X’s words about African spiritual and cultural gifts being brought to the American continent, the back cover of the American Mass Program says, “During its first two years of use, not a single note of An American Mass Program was written down. Father Rivers had composed the melodies originally for his own inspiration and enjoyment, but later used them to develop a program of active participation in the Mass at St. Joseph’s Church, Cincinnati.” Talk about gifts to the church!

Her prayer card includes the sentence, “Her prophetic witness continues to inspire us to share the Good News with those whom we encounter; most especially the poor, oppressed…”

Sister Thea’s FSPA community instructed her, “If you get, give—if you learn, teach.” 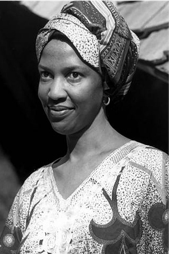 Contemplation – The Smallness of Our Alms