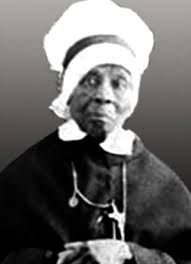 Racism is defined as systemic oppression of a racial group to the social, economic, and political advantage of another. Fortunately, this “pain of prejudice and racial hatred never blurred [the] vision” of Elizabeth Clarissa Lange, a free, French speaking, Black woman.  She walked into her vision around 1813, into Maryland from Santiago de Cuba (born circa 1794). Her arrival in Baltimore coincided with Sulpician priests, Haitian refugees, free blacks, and slaves escaping violence from the French Revolution. In Maryland, they found a haven and home to one of the country’s largest populations of Roman Catholics. Unfortunately, it was also a state that accommodated racism and institutional slavery.

Through the pain of racism, God opened Elizabeth’s heart and spirit to see children of immigrants, unsupervised, and uneducated; she became an eyewitness of injustice in America. Using her own funds and skills, with help from a few friends, she opened her home to educate and house orphaned immigrant children of color. In their collective devotion to intellectual, spiritual, and social development of students, she established the first Catholic School for children of color, providing instruction in a hostile, slave era. Later in 1828, Elizabeth founded the first and oldest, continuously operating school for Black students in the United States, St. Frances Academy.

Despite attitudes of the times, she continued to hear God’s voice and embraced another vision. In 1829, Elizabeth and three ladies (Magdaleine Balas, Rosine Boegue, and Almaide Duchemin), answered their calling, took their vows, under the spiritual direction of  Reverend James Hector Nicholas Joubert, SS (Founder), and became the first female religious order of African descent in the world. After prayerful consideration, they selected the name “oblate,” meaning “one who is specifically dedicated to God or God’s service,” and became the Oblate Sisters of Providence. Elizabeth took the name of Sister Mary (Foundress). They embraced their calling, spirituality, and African identity by including St. Benedict the Moor as one of four special patrons for their religious community.

From the beginning, the Oblate Sisters of Providence confronted the humiliation of racism. Whites avoided them by walking on opposite sides of streets. Sometimes they were forced to walk in muddy streets because whites would not share sidewalks with them. Once Sister Mary almost met death by being pushed into a moving carriage because of racial hatred. They were never called Sisters, but Girls.

As people of color, they were required to sit in the rear of Church, and Holy Communion was offered to them from a different ciborium only after whites had received. Sister Mary knew God would provide, so she persevered, through prayer, to keep her new order vibrant, despite hatred among fellow Christians. Under the leadership of  Sister Mary (Mother Mary Lange), their faithfulness and numbers continued to flourish, and they provided an atmosphere of faith and hope to parents and children degraded by a slave society.

Unfortunately, racism continued to flourish in antebellum Baltimore, too. After the death of their founder, Fr. Joubert, financial hardships mounted. Although educated, with many skills, these Sisters never found opportunities to work beyond that of domestic workers. Also, housing became an issue for them: forced to move several times because of financial distresses; evicted because of their race; and uprooted abruptly for the City to run a street through their property to make them move (early days of gentrification). Unfortunately, their black lives made them vulnerable to unrelenting prejudice. Under the guidance of Mother Mary Lange, when people humiliated them, they prayed. When daily life tried to degrade them as a religious congregation, they served with the power of the Holy Spirit.

Catholic thinking of the day, considered them unworthy to wear veils, usually worn by white religious women, so they wore caps. All attempts to humiliate their religious community failed. Devoted to prayer, they worked hard to survive and gain respect for the Holy habit they did wear. Their habits made them visible, and their service made them indispensable in times of need. Requested to help during a Cholera pandemic that devastated the world in 1832, the Oblate Sisters of Providence chose to listen to God and served as nurses for victims of this disease. Again, God provided, and not one Sister lost their life because of that service. The Oblate Sisters adopted as their motto, “Providence will provide.” Yet the pain of prejudice never stopped.

In face of this relentless racism, many free black Baltimoreans of the times, protested, spoke out against racial discrimination, fought for organized schools and churches, built community institutions, criticized severely slavery, and advocated for emancipation, so did the Oblate Sisters of Providence. As foundress of the Oblate Sisters of Providence, Mother Mary Lange became the first Superior of this religious community. At their pinnacle, membership included more than three hundred Sisters in the United States, Cuba, and Costa Rica. From the beginning of their founding, Providence enabled the Sisters to demonstrate leadership and divine daring in the face of poverty, racism, humiliations, and untold hardships. Documents attesting to the heroic life of virtues, self-empowerment, and works of charity of Mother Mary Lange were received by the Congregation of the Saints in Rome. As she awaits the final word for her beatification and canonization, we pray and remember that she was “endowed by God with humility, courage, holiness and an extraordinary sense of service to the poor and sick…the pain of prejudice and racial hatred never blurred that vision.”